The Meaning of "Life" 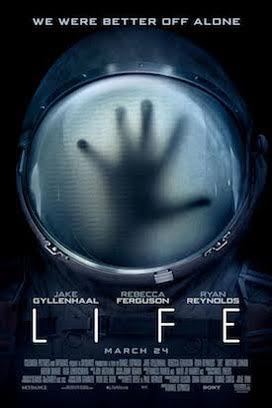 Taking advantage of the fact that movie tickets in Mexico (where I currently live) are about a third the cost of those in the USA, last night I saw the science fiction-horror film, "Life."

Note the title of the movie in Spanish is actually "Intelligent Life" (Vida Intelegente), which is actually somewhat more appropriate.

I'm going to discuss some problems I saw with this film, leading up to a general criticism that applies to many recent movies. A few spoilers follow, though most of what I will mention you can deduce pretty easily from the movie trailer and the poster I shared. I will deliberately avoid telling exactly how the movie ends and will be rather general about the information I share.

Yes, as per the trailer, life is found in a sample of soil brought from Mars to the International Space Station (ISS). The scientists on board, a special crew largely dedicated to studying the Martian samples, nurture this life into a multi-cellular organism, which over a process of time turns out to be malevolent. And intelligent, as per the movie title in Spanish. Most of the crew is dead by the end of the film.

This is sort of what we expect from a thriller set in space, what is essentially the retelling of 1979's Alien film, except in near-Earth orbit. Except...Alien was both thought-provoking science fiction for those interested in that, with an internally-consistent world view, AND a really scary film. Whereas Life managed to be mostly not that scary with the exception of a few notable scenes while not being very thoughtful at all--plus the story world it builds off is a jumbled mess.

The scariest scene in the movie is mostly given away by the trailer. There is something quite terrifying about the idea of having your hands in those gloves in a biological sample container--and then the SAMPLE grabs you and won't let you go. Only one other scene I found as uncomfortable as that, but if you've seen Alien, the second scene, which featured the alien entering a human body, comes off as a gruesome echo of what was a much more surprising scene in the 1979 film.

One of the things I really liked about the movie Life is how convincing the visual scenery was. It looked like the setting really was on the ISS and at times the view was stunning.

However...that leads to the film's greatest downfall. When telling a story, even in science fiction, you create certain story rules that a good story sticks to throughout the tale. Given an interstellar freighter on a deep space mission backed by a greedy corporation who is willing to risk the lives of the crew to bring back a potentially profitable life form--and you have the story world for Alien. Life's story world setting is as part of most highly publicized mission on Planet Earth (intended to bring back life from Mars), with an internationally well-known crew, on a orbital platform with numerous safety back-ups of many types and which is in constant communication with Earth via various means.

In spite of what you'd expect from the setting, Mission Control is virtually non-existent in this movie. As you might expect (in imitation of Alien), the crew does get completely isolated from Earth...which I don't have a problem with as the direction the plot needs to go. But hey, this is the ISS. That isolation should not come so soon. There are multiple communications systems and they don't just switch off from a single quick cause. Why not have the alien take them out systematically? Nope, that's not what happens.

In general the movie makes the ISS take on a lot of features the International Space Station does not actually have, like single-person escape pods and quite a lot more. The plot at one point envisions pushing the ISS into deep space but you can't actually do that with any kind of normal system. The ISS is too big and too low in Earth orbit. There's more, quite a lot more technological problems, which made the stated setting into something that's really quite different from a real place that actually really IS orbiting Planet Earth. I don't want to give all of these errors away, but they are numerous.

I want to be clear that I don't have a problem with changing the features of a real place for a story. Let's say the Empire State Building in New York City has a secret floor for government experiments. OK, no problem. Or a secret elevator. OK, cool. But as my imaginary example goes on, let's say we find out halfway through a movie that the secret elevator actually goes to hell...what, that's weird...oh and also, the Empire State Building can fly. I'd think: Really unlikely, but maybe with giant jets or something--but no, it can fly because somebody fitted it with a balloon the size of a baseball filled with a really special lifting gas...eventually I  find myself saying, ER, NO, THIS IS DUMB.

So there's that, the false story world. There's also the fact that the life in "Life" is seriously overpowered. It is not shown to be able to do anything it wants, but it gets quite close to that. Ordinary things that kill all known life don't work on it. And unlike in Alien where the features of the monster are revealed step by horrifying step, the beast in this film goes from innocuous to murderous to practically invulnerable at a very steep curve.

There's also the crew. For highly trained astronauts and scientists, they seemed a bit dim. There were multiple times while watching this movie I thought to myself, "OK, that's not going to work. Don't do that." Or, "Hey, that's clearly not working, do something else." But they kept on pursuing their bad ideas until they imploded.

By contrast, I felt the crew in Alien did things that made sense for the characters--even if at times their planning wasn't the best, it had internal logic. They, after all, were a space freighter crew, professionals but ordinary people at the same time. The crew of Life are supposed to be the brightest and best Earth has to offer...but they seemed, most of them, a bit ordinary in terms of how quickly they figured things out.

But even though they were ordinary in brain power, they were not as sympathetic or interesting as the characters in Alien. They seemed a bit like cardboard cutouts instead of fully-developed characters (to me at least), with one surprising exception to that--the Japanese astronaut, who wasn't even one of the headline actors in the film.

So how did this film get made with so many story problems? What inspires a studio to create an inconsistent story world, shallow characters, an over-powered baddie, and an unconvincing plot?

I find myself answering this by going back to what the film did best--it's visual effects. The film sure looked good. The actors were attractive, too. It seems that no expense was spared to provide visual images. The looks of the "life"form itself, which was a product of CGI, could perhaps be criticized somewhat. But I would say if the alien failed to be fully convincing it was because of how it moved and how it acted, not because of what it looked like.

It seems that recently when studios think "science fiction" they spare no expense to pour money into visual effects. Stunning visuals are more and more common in movies. But at the same time, the stories as in plot, character, and consistent story setting seem to be getting put on the back burner.

So what is the meaning of "Life"? It means that movie studios think science fiction fans care most about special effects and that stories, especially those with internally consistent story worlds, don't matter much.

Are they right about that?

I surely hope not.

July 21, 2015
The idea of terraforming nearby planets (or more distant ones) is well established in modern culture. Moreso than I knew. The linked Wikipedia article on "Terraforming in Popular Culture"  lists science fiction, movies, and video games that make reference to the idea. Some of the most important pioneering stories I was familiar with, including Robert Heinlein's  Farmer in the Sky  and Isaac Asimov's The Martian Way  (both of which I'd read). I had also heard about Kim Stanley Robinson 's Martian Trilogy ( Red Mars , Green Mars , and Blue Mars ). But I didn't know that there are at least 15 science fiction stories that feature terraforming, as well as at least 20 TV and movie references to it and over 30 video games in which terraforming is either a goal or a plot element. Those used to easy travel to other worlds in a lot of popular science fiction (which are often really a part of the sub-genre "Space Opera"), such as in both Star Wars and Sta
8 comments
Read more

July 19, 2013
Inspired by the history of Europeans coming to the New World carrying bacteria to which the native inhabitants had little to no immunity, I thought: "What if aliens visiting Earth carried their own sort of infection or infestation, to which we humans had no immunity?" Sort of a War of the Worlds scenario in reverse... But I'm sure that sort of thing has already been done by someone, aliens carrying virulent disease(s) humans don't carry. So what if the infestation were of nanites--what  if nanites become a standard part of healthcare for any advanced technological species? (Just as hand washing and sterilization of medical instruments become standard at a certain point of development--once bacteria are discovered and found to be potentially harmful.) So that nanites are literally crawling all over (and inside) the bodies of high-tech aliens (or perhaps time travelers from Earth's distant future). What if these nanites potentially posed a risk to the human race?
Post a Comment
Read more

March 13, 2021
The Travis’ are back with another installment of our series on Warfare. We’ve been analyzing a writer’s perspective on calculating the cost of war, developing some tools and thumbrules you might start with when calculating the cost of war in your story, and seeing how this mundane task can yield helpful ideas for your writing. At the very least, your effort to make your warfare come across as thoughtful and realistic (by your story world’s gauge of consistency) will be appreciated by the discerning uber-fans your serving.  Travis C here. Last time we left off with a detailed approach to calculating how much food both human and non-human fighters might consume and began a illustration using those calculations to gauge the financial impact of war in a fictional world. Our purpose wasn’t to delve into all possible fine details, but to give you an example where doing a bit of math can provide some values for you to work from. This week we’re going to dive into another significant expenditu
Post a Comment
Read more